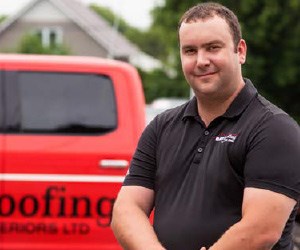 Mark Weckwerth could never imagine working for anyone else, so he created a job for himself almost immediately after graduating high school.

The plans of the 27-year-old owner of Bay Roofing and Exteriors have changed a few times in the decade since high school, but it’s always included selfemployment and meeting a need in the community.

It all began when the North Bay entrepreneur was 19. He read an ad on Kijiji for someone who ran loads of people’s refuse to the dump. His parents had an SUV sitting in their backyard, so he figured he might as well put it to work. It turns out there was a demand for what he was offering.

“Within no time that got super busy so I bought a bigger truck and started moving furniture and stuff. Then I started moving houses and eventually the furniture stores started calling me,” said Weckwerth.

By this point, he had acquired a bigger trailer, and business was booming. Always open to change, Weckwerth saw another chance to grow.

“I started realizing when I was delivering appliances that the scrap metal was worth more coming out than moving it, so I slowly got out of the moving.”

He bought some flatbed trailers to transport and sell scrap metal, and rented them to local roofers on the side.

By 2015, another chance for change popped up.

Scrap metal prices started going down and an opportunity arose through a roofer he had met.

“All of a sudden, the old owner of Bay Roofing came by and he was looking to sell,” explained Weckwerth.

“It had a great reputation. They put their whole lives into it. He made me a deal I couldn’t refuse.”

His uncle, a roofer, gave him someone to learn the business from, but that first summer proved challenging.

“At first I didn’t have any roofing experience whatsoever,” he said.

His people skills helped him find a crew relatively quickly, but it still took some time to get settled.

“I lost a bit of money my first year, wrong pricing and not having the right guys,” said Weckwerth.

“The first year I didn’t know how long I’d be able to do this.”

But that feeling was short-lived. Before long, he’d ironed out the kinks, hand-picked a crew he felt good about, and business was thriving.

“I just gave it my all every day and the next thing you knew we were busy and the guys were doing great work.”

Weckwerth comes by his passion for entrepreneurship and self-employment honestly.

His dad is a chartered accountant who he said “taught [him] to think business-wise, to see the bigger picture and that there’s always a way to make more money.”

Over the last year he’s focused on expansion. From one roofing crew, he now has four.

As for his future plans, Weckwerth predicts more growth and more improvements.

“The way I see it going, this company’s only going to get bigger and stronger. We’re going to have better guys, more trucks, more trailers and all for a good service.”