“The teams mentioned to us that they have never been at an event where every team got a standing ovation when they walked off the ice, win or lose,” said Brown. “They were just floored by that.”
Sep 1, 2020 4:15 PM By: NOBA Staff 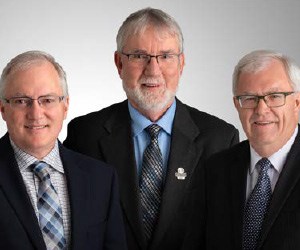 Before the start of 2018 Ford World Women’s Curling Championship in North Bay last March, officials with Curling Canada and World Curling Federation tried to temper the enthusiasm of their local hosts.

Don’t be too disappointed, they cautioned, if you see more people on the ice than in the stands for the opening ceremonies at North Bay Memorial Gardens. Maybe 300 or 400 spectators will show up, at most.

“We filled the place with over 3,000,” said Mark Brown, board of directors president of the North Bay Granite Club, who co-chaired the event with Dave Bennett and Rick Miller. “The delegates were blown away.

“When I marched out there and looked in the stands, you were just so proud. It was such a great feeling. I knew from that point on we were going to be just fine.”

That seemed to be a familiar reaction during the competition from international curling delegates, athletes, and out-of-town guests and media. The accolades kept coming and the crowds kept building.

Thousands would attend the morning and afternoon draws, with spectators jammed to the rafters of the 4,000-seat Memorial Gardens by evening.

“The teams mentioned to us that they have never been at an event where every team got a standing ovation when they walked off the ice, win or lose,” said Brown. “They were just floored by that.”

There were whispers if the city of 50,000 was punching above its weight class in taking on a prestigious sporting event of this size.

But the nine-day event set a record attendance mark of 69,391, the most for a women’s championship on Canadian soil, and pumped $7.3 million into North Bay’s economy.

Five years earlier, North Bay taxpayers were angered by the cost overruns to renovate Memorial Gardens to attract an Ontario Hockey League franchise and upgrade the 60-year-old facility into a multi-purpose venue.

With a focus on sports tourism, the City of North Bay was hungry to land a major event.

When Granite Club officials caught wind that Curling Canada and World Curling Federation were struggling to secure a host city for the 2018 World Women’s event, they partnered with the city to submit a bid. After a site visit by Canadian curling officials and an interminable wait, they finally got the nod last September.

Brown attributes much of the event’s success to the army of 400 volunteers, who “took ownership” and worked beyond their scheduled hours as statisticians, ticket and program sellers, shuttle drivers, hospitality hosts and labourers.

“I was amazed at how smooth the event ran,” he said. “I can recall walking around that arena constantly trying to find things (that needed attention), and there wasn’t. It was so minimal.”

For the Granite Club, the world championship turned a tidy profit of more than $170,000 to invest in capital improvements at the club and into junior curling programs.

For an encore, Brown said the championship imbued them with the confidence to consider bidding on curling events of similar stature.

“It now puts North Bay’s name up front on a world class level in the sporting world.