“We recognize it here in Sudbury that to move forward in this industry you need to broaden your horizons,” he explained. That’s meant learning about new cultures, and learning from them, too.
Sep 1, 2020 4:13 PM By: NOBA Staff 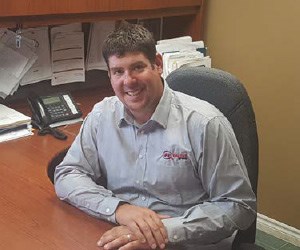 In an increasingly connected world, some Northern Ontario companies are realizing the benefits of going global.

The Walden Group, a Sudbury-area industrial and mining supplier, is one of those. Their commitment to developing and serving export markets has introduced them to a whole new world of financial and learning opportunities.

v The Walden Group of companies, established over 25 years ago by Paul Ferguson, and now succeeded by his son and current-day president Chris Ferguson, consists of three distinct entities.

J&S Manufacturing, a 2009 acquisition, produces mine utility equipment, with Walden Equipment as the sales and service provider for J&S. Walden Electrical deals mostly in local contracts.

Their foray into exports has been relatively recent.

Seven years ago, thanks in part to assistance from the Northern Ontario Exports Program, the Walden Group established a sales and service centre in Mexico, followed by distribution agreements in that country, Chile, and Germany. More such agreements are in the works for Mongolia and Africa.

Growth has been rapid with a 200 per cent increase in sales in Latin America, 14 new jobs created between the Sudbury and Mexico offices, and an overall increase in manufacturing of 30 per cent. Where once virtually all their business was domestic, currently 20 to 30 per cent of their output is export-related.

Some of the company’s gains can’t be quantified, according to general manager Ryan Lougheed.

“We recognize it here in Sudbury that to move forward in this industry you need to broaden your horizons,” he explained. That’s meant learning about new cultures, and learning from them, too.

From basic language differences to technical ones, there were some learning curves.

“When you go to other countries, you’re dealing with Spanish, different dialects, Portuguese,” explained Lougheed. “Mining processes are different in some of these countries compared to what we’re used to here. Certain things you have to be very cognizant of. Just the electricity that’s delivered here in Canada can be different than in other countries.”

What helps is having good communication with export partners and enlisting local distributors as experts, such as Subterra who distributes their products in Brazil.

“Building a relationship is very important in the export markets. There’s a million miles between us and you’ll run into something eventually,” he said. “When it comes to understanding culture and understanding other country’s laws, some of those challenges are best suited to work through distribution. They smooth over the process.”

In the next few years, Lougheed said they expect more global growth. While some mining projects like the Ring of Fire will ensure Walden will be busy domestically, others like Rio Tinto’s developments in Mongolia promise more export opportunities.

“We see some big things that are happening on that front, but it’s also unknown territory,” said Lougheed.

“But all of these things that we see lead to further requirement for mining manufacturers.”

At the end of the day, the learning experience from their export activity has been overwhelmingly positive.

There are opportunities to learn about new technologies that mean cheaper, more environmentally-friendly production, like the shift towards battery-powered equipment, Lougheed mentioned.

“It has its interesting moments. A lot of these (positives) are that what we develop in Canada, and here in Sudbury, is a sought-after piece of equipment. It’s nice to know this little corner of Canada is a hub for markets such as Mexico, Brazil, and Chile.”