“Our success is due to a lot of blood, sweat and tears from the individual businesses, and it’s wonderful how well we work together,” he said.
Sep 1, 2020 4:11 PM By: NOBA Staff 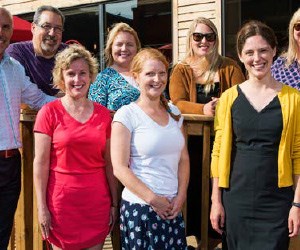 Thunder Bay’s Waterfront District BIA has been transforming the city’s north core over the years into an entertainment hub and a thriving haven for entrepreneurs and artists.

BIA chair Jim Comuzzi said while it continues to grow and prosper, it still maintains a nurturing atmosphere.

The bulk of the credit for its success, he said, goes to the board and the businesses themselves, which he said have spent nearly a decade working closely together to rebuild and rebrand the area as a business-friendly zone.

Even though they are competing businesses, they take care of each other with the common goal of raising the district’s profile as a whole.

“Our success is due to a lot of blood, sweat and tears from the individual businesses, and it’s wonderful how well we work together,” he said.

“It doesn’t matter who we are, we are all here to help each other, and it seems to be working well.”

The BIA’s focus is on growth and marketing the district as a place to work, eat and play.

They offer a comprehensive list of programs and services, from erecting banners and maintaining planters, to social media advertising and sponsorship donations.

Like any economic district, people and businesses come and go. But in the Waterfront BIA, vacant spaces are filled fast with entrepreneurs eager to get into the district.

The district started to see a resurgence around 2010, when the City of Thunder Bay embarked on an urban planning endeavour to revitalize the downtowns of the former twin cities of Fort William in the south and Port Arthur in the north.

The BIA’s proximity to the newly redesigned Marina Park made it an ideal place to attract tourists and residents to the natural beauty of Lake Superior.

By collaborating with the City of Thunder Bay and business owners, the BIA worked on attracting new entrepreneurs and filling up vacant spaces with a wide variety of businesses, ranging from galleries, restaurants and specialty boutiques, as well as helping existing businesses improve.

The city has been a big help in infusing life into the area with a condo development and the construction of new hotels. The developments and improvements to infrastructure have proven effective in attracting people to the area.

Improving the district for business also means the quality of life for residents improves as well.

The BIA has been active in charity work and attracting events to the area. Among the many endeavours the district supports are the Dew Drop Inn soup kitchen, and Our Kids Count, a community development organization.

The district has also positioned itself as an attractive place to host local events, such as The Craft Revival, Northern Delights (a culinary experience hosted by district restaurants) and free events like Live on the Waterfront, featuring concerts during the summer in Marina Park.

The group is also open to attracting outside events, such as Ribfest, to give residents another reason to come see what the Waterfront District BIA has to offer.

The BIA been so successful, there are plans to expand the to encompass larger area, Comuzzi said.

“We look forward to many more years of working together and growing.”