“STUFFF’s product embodies true fluid performance and is both non-toxic and environmentally safe. This provides our product with a unique advantage and innovative approach to the biolubricant industry.”
Sep 1, 2020 4:07 PM By: NOBA Staff 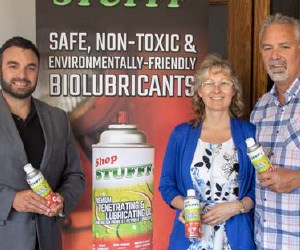 Motivated by a desire to find an alternative to petroleum-based shop lubricants, Bill Betournay turned to a common kitchen ingredient to produce the right STUFFF: canola.

The vegetable oil is the main ingredient in his line of STUFFF Lubricants, which Betournay launched in 2016 and includes variants for workshops, cleaning guns and tools, dust control, and asphalt and ice release.

But this wasn’t innovation by design – Betournay actually hit on the idea by happenstance.

Looking to reduce the cost of heating his Richards Landing home on St. Joseph Island, east of Sault Ste. Marie, the self-described tinkerer had already come up with a formula for turning used canola oil into biodiesel fuel when he ran out of lubricant one night while tuning up his truck.

On a whim, he applied a little of the biodiesel fuel to a seized part and quickly realized just how well it worked to loosen everything up.

In doing his research, he discovered there weren’t any biolubricants on the market that used canola as a base. So he set about creating his own.

He has standing partnerships with area restaurants to collect their used fryer oil – which they would otherwise have to pay to dispose of – to source raw materials, which has the additional advantage of diverting waste from area landfills.

“This is a product that was derived completely accidentally, which will fill a need for a safer solution to the harsh, crudebased workplace chemicals that the industry is faced with,” Betournay said.

“STUFFF’s product embodies true fluid performance and is both non-toxic and environmentally safe. This provides our product with a unique advantage and innovative approach to the biolubricant industry.”

Jeff Greco, who worked recently with Betournay to set up STUFFF’s e-commerce site, was impressed by Betournay’s astuteness in recognizing opportunity when it arose.

“Not only did he have the awareness to turn a ‘mistake’ into a highly valuable product, he also has the vision and drive to take it to the next level,” Greco said.

“After many hours of conversation over the development of this website, it was apparent that years of R&D went into the STUFFF product line and it’s now ready to go to market in a big way.”

Big enough that Betournay and STUFFF were selected by CBC’s Dragons’ Den television show to record a segment for a future episode during the 2018- 2019 viewing season.

“While we aren’t at liberty to disclose any details about the outcome, we believe that our pitch was extremely competitive and entertaining,” Betournay said.

Should his segment be aired, STUFFF will get exposure to a national audience. Currently, the STUFFF product line is available from retailers like Home Hardware, Sling Choker and Maslack in more than 15 communities throughout Ontario, including Sudbury, North Bay and Sault Ste. Marie.

Users who have used STUFFF have raved about its performance, and between 2016 and 2017, sales increased by 77 per cent.

Betournay guarantees satisfaction. “It will work better than anything you have used so far,” he said.