“The combination of professional qualities, along with his upholding of the Indigenous culture, has made Lindsay a distinguished member of the North Bay community and the photography/ design community as a whole,” said Fortin, the centre’s executive director.
Sep 1, 2020 4:09 PM By: NOBA Staff 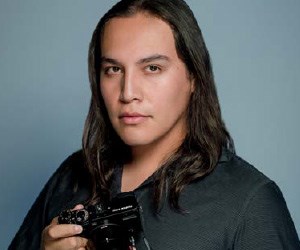 Lindsay Sarazin is an accomplished Algonquin multi-media artist, working in dance, visual and media arts, photography, and film. But it’s the latter two mediums that have helped the North Bay resident develop a name for himself.

Since 2014, Sarazin has owned and operated Wolf Eye Productions, a freelance multimedia company that provides film and photography services to a variety of clientele, from couples wanting to capture their big day to corporate clients seeking promotional content.

He started out shooting family portraits and weddings, with just a few clients a year, before branching out to work with local organizations like Aanmitaagzi community arts organization, the White Water Gallery, and the Near North Mobile Media Lab, where he honed his skills and experience.

Soon he was contracted by film productions for still photography, and engaged by organizations such as the First Peoples Centre at Canadore College and the North Bay Indian Friendship Centre.

Mair Greenfield, the community service learning officer at Nipissing’s Office of Aboriginal Initiatives, has, since 2012, hired Sarazin to document the department’s work. She is consistently impressed by his initiative and the superior level of work he provides.

“Lindsay’s work is high-quality; he delivers on time and in a user-friendly platform,” Greenfield said. “He goes over and above by adding more than graphic design and photography to our programs. He brings happiness, humour, knowledge and a positive feel for our community of learners.”

Kathy Fortin, too, appreciates Sarazin’s work ethic, calling him diligent, determined and professional, which “set Lindsay apart from every contractor with whom the North Bay Indian Friendship Centre has done business.”

“The combination of professional qualities, along with his upholding of the Indigenous culture, has made Lindsay a distinguished member of the North Bay community and the photography/ design community as a whole,” said Fortin, the centre’s executive director.

Today, Sarazin’s business is steadily growing year by year, and he’s travelled across Canada and even as far as Costa Rica to follow work opportunities.

But no matter how far he roams, giving back to his home community is important to Sarazin, who volunteers with the North Bay Indian Friendship Centre, frequently discounting his services so families in need can afford family portraits at Christmastime.

He has additionally done light work with the Cancer Society of North Bay and mentors upcoming photographers in the North Bay Photo Club.

As his client list grows and diversifies, Sarazin hopes to eventually hire a full time team, growing his business further.