“We see design as not just something that looks pretty, we see it as a very important function in society,” said Nighbor.”It’s not just to beautify the world but make it an easier place to live in.”
Sep 1, 2020 3:12 PM By: NOBA Staff 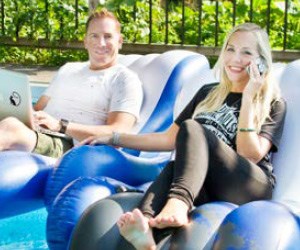 The competitive drive that landed Dave Nighbor on Canada’s national junior ski team at 16 still pushes the North Bay resident to be among the world’s best in graphic design.

Nighbor is the creative director at 9 Lives Design, a home-based business he co-owns with his wife and business partner, Jade.

In a 10-year career that first began as a freelance graphic designer and progressed into an award-winning design studio, the former cross-country ski racer has amassed an impressive mix of national and local clients, and garnered accolades from the design world and his home community.

With an agenda to bring world-class design to North Bay, the agency specializes in website design and interactive media, brand identity and print materials for projects and campaigns for clients ranging from Alpine Canada and Cycling Canada to the hometown Capitol Theatre and Northgate Shopping Centre.

The transition from being an elite-level racer to creative design was an easy one. As a change of pace from competitive racing, art had always been his constant companion, whether it be realism painting, sculpting or silk screening.

“Arts and sports are not normally two things that go together.”

A web developer friend introduced him to graphic design in his early 20s and he immersed himself in the craft.

“It blew my world because I realized this was an art form that was calling to me.”

With a career in skiing far from lucrative, injuries taking their toll, and the constant pressure to retain a national team roster spot, Nighbor opted for retirement at 24.

“When you have a bad day at the office in sport you can potentially not make the national team the next year. It was a lot more fun for me to explore something like design and have that creative outlet. It was a no-brainer.”

Nighbor enrolled in the demanding design program at York University and Sheridan College in Toronto.

After graduation, there were tempting job offers to work in Montreal, Dublin and Tokyo but the couple’s weariness of urban life led them back to familiar surroundings and a relaxed pace of life in the Gateway City to start a business.

“The teachers were really disappointed that I was moving to North Bay,” said Nighbor. “They thought I was squandering my ability and my talent if I go up to a smaller town.”

Yet his biggest clients in Toronto, Calgary and Vancouver could care less where he’s domiciled.

“I can deliver concepts over the phone and send files very easily, and no one’s ever had an issue with me working remotely. In business, as long as you do what you say you’re going to do and deliver on deadline, people don’t care if you meet face to face.”

His company’s mission statement is to “improve the lives of others through design.”

“We see design as not just something that looks pretty, we see it as a very important function in society,” said Nighbor.”It’s not just to beautify the world but make it an easier place to live in.”

The couple dialed back their initial vision of creating a large design agency and minimalized it to a two-person shop. They poured their creative effort into being a purpose-driven firm, keenly attuned to their clients’ needs while educating them on how technology can broaden their marketing horizons.

On a volunteer community level, they’ve developed in-kind fundraising websites for the city’s business, athletics and the arts scene, as well as provided marketing material and platforms for local campaigns and charitable endeavours.

“The bar is always the same. I want to be among the best designers in the world. Having been in sports, the goal was always to be the fastest skier in the world. When I quit skiing and went into design that mentality stuck with me.

“I’m constantly seeking and dissecting all the top designers I see in the world.

“When get an award or a designer I respect compliments my work, that’s when know I’m going in the right direction. But I’ll never get tired of wanting to improve.”