Carole Long is a veteran as seasoned as the food she serves at northwestern Ontario's first Pita Pit.
Sep 3, 2020 11:41 AM By: NOBA Staff 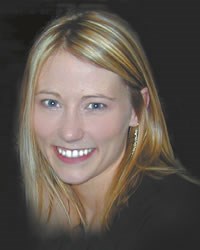 Perhaps Carole Long should be disqualified as the Northern Ontario Business Award's 2005 Young Entrepreneur of the Year.

The 27-year-old is a veteran as seasoned as the food she serves at northwestern Ontario's first Pita Pit.

After all, she has been eating, sleeping and breathing business since she was about five, pretty much as long as she can remember.

It was at that age that she started getting off the school bus at her mom's business, Microwave World, where her real education took place.

Thunder Bay Chamber of Commerce president and CEO Mary Long-Irwin closed her retail outlet about seven years or so later, but not before instilling an untamable fascination with business in her daughter.

To say Carole was born into the business world, destined to open her hometown's first pita joint, may be a bit strong. But the winner of the 2005 Influential Women of Northern Ontario Young Entrepreneur Award believes there is no substitute, including a university degree, for a childhood in a family that owns a business.

"When I talk to young kids at the high schools, I tell them not to brush that off (as worthless)," she explains during a post-lunch rush break at the restaurant. "It is a huge asset. People go to school for business for four years. You can't grasp (in a classroom) what people have absorbed for their whole lives in seeing their parents live through it."

Long gives her mom, who opened her store at 25, a lot of credit for allowing her and her sister to feel like a part of the business on those school day afternoons, if only for make-believe.

"She would always let us do things. We would write down things - I remember filling out a cheque for her. I remember always asking why. I always had an interest in how business worked in the sense of buying a product and selling it and all that. I think that's where a lot of that came from."

Long has had her share of sleepless nights, wondering whether she could convince the Pita Pit's franchise officers in Kingston to give her a go, where she was going to get the financing from, and, after a setback, how she would climb out of what would surely be bankruptcy protection.

But she never doubted her ability to run the thing.

"It's funny, because when I thought about opening up the business, I didn't think for one second I couldn't do the business part of it," she recalls. "I felt like it's inside of me. It's something you learn from observing your whole life, watching. Also, all my aunts on my mom's side are all successful women - it's all women and my one uncle. It's just a drive inside of me."

Long's "school of hard knocks" conviction is not without support. She recently hired a student from Halifax who had grown up around his family's restaurants. "This kid in an instant knew what was important, knew waste control, food costs - everything - because he heard it over his dinner table. It's so valuable."

Dinner conversation was no different at the Long residence.

"We would talk about things often," Carol says. "I would ask 'How do people figure out if a product is going to sell?' That's when she told me about surveys and asking questions and figuring those things out. Even over dinner, every discussion has to do with business. As long as I can remember, we've been talking business in my family."

Long hopes to take that ingrained education and apply it to her next project, a patented multi-application wetsuit with detachable leg and arm lengths.

Now that she has fully bought out the partner she launched the Pita Pit with, Long feels financially stable enough to look at hiring some management staff so she can take a step back from its day-to-long-day operations.

She admits she probably won't be able to let it go anytime soon and will be in fairly frequently, so let that be a warning to her staff.

That said, she has no worries her staff can handle themselves without her hawking over their shoulders. She has a close-knit staff. They work well together and see one another as friends, not just co-workers. That is a quality largely shared by the business community in Thunder Bay, Long says. Without it, she may never have got her business off the ground.

"Everyone is connected in one way or another."