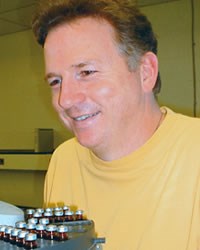 Attention to quality assurance and customer satisfaction has made Testmark Laboratories Ltd. one of the top three burgeoning facilities in the province. It has also earned the 2005 Northern Ontario Business Award for Company of the Year (16-50 employees).

With over six years of industry experience and three PhD-level scientists on staff, Testmark is able to provide clients with proficiency, technical expertise, competitive pricing and superior customer service for water, soil, waste and particle testing.

Two years ago, Testmark moved from their cramped quarters in downtown Sudbury to a 42,000-square foot, renovated, elementary school house in Garson, a former town in the City of Greater Sudbury.

One of the reasons was to create a science-based entrepreneur incubation centre for young researchers, who have great ideas but little or no start-up capital to go along with them.

The other reason was to position the company to take advantage of new food and pharmaceutical initiatives on the horizon. Although the company is remaining tight-lipped on upcoming projects, growth is expected.

"I think we will have about 80 employees at this site," Mark Charbonneau, CEO and Testmark founder, says. "I can see that happening in the next four years."

Most of the people working for Testmark are from the North, having gained experience elsewhere in the world. Last year the company had 15 employees on payroll. This year technicians, engineers, scientists and clerks make up a staff of 24. Sales in the business have shot up exponentially.

"Our sales alone are 47 percent over last year," he says, "and we have not even touched the tip of the iceberg." Over the past five years, sales have increased by approximately 29 percent annually. Their current sales figures sit in the seven-digit range.

The viability of the company is what makes it a strong economic force in the North.

Operating debt free allows Ron Leader, CMA, and Charbonneau to stake out acquisitions and hire new employees who will generate numbers and interpret them, helping clients understand their significance.

Client demands has always been the driving force of Testmark. Client N.A.R. Environmental Consultants Inc. will attest to that.

N.A.R. specializes in finding environmental solutions for the mining industry. A third of their overhead costs stem from lab activity Brad Bowman, president, says. Because Testmark is a Northern facility, Bowman does not have to send specimens to a southern Ontario lab. This cuts down on costs. As well, having Testmark so close helps N.A.R. Develop methodologies for solving new and complex challenges.

"We have unique problems that we encounter in the nature of the work we do," Bowman says.

"Often we need to work with the laboratory to find a solution. We have developed a good working relationship. They have always been there on time and on budget and that is why we stuck with them."

It is not a perfect world and even experts at times make mistakes, but the difference is Testmark scientists are very receptive to investigating where the problem is and resolving it, he says.

If it means re-analyzing samples or re-checking mathematical calculations, they will do it, Bowman says. It is the standard Testmark clients have come expect.

"Mark has done a great job in growing the basement operation to a world-class lab,"Bowman says.

As Testmark expands, Charbonneau says he will make the best decisions "to ensure the entity grows."

If it means stepping back, he'll do it.

"What I like now has to be superseded by what is best for the company," he says.

Other scientists have hired presidents to oversee the business matters, then receded to a technical position. "It makes perfect sense because (for me) it is not about ego-tripping."

If ministry auditors are correct, Testmark will be one of the top three lab in Ontario fairly soon. Labs usually grow by acquiring other facilities. Testmark is looking to expand its base in Northern Ontario and establish a small lab in Toronto that could funnel new work to Sudbury.

Success has not always come easy for Testmark. When the company first opened, Charbonneau, who has a reputation as an analytical chemist remediating contaminated Inter-Continental Ballistic Missile (ICBM) sites, was the only scientist. Simple water tests from clients in Toronto and Ottawa jump-started the company. Then began the metal testing.

"I did this while I was living in my in-laws basement. I never took a salary for almost three years. It was rough. "Entrepreneurs have to be a little whacked," he says grinning with his eyes lighting up.

Then local businesses started to trickle in. The trickle soon became a torrent and now there is a consistent flow of projects and initiatives for Testmark. Today company employees service over 250 public- and private-sector clients.

Charbonneau was first going to open Testmark in Toronto. In fact, he had solidified a deal for space and was celebrating over a cup of java at one of the largest malls in Toronto. When he saw the "mass humanity passing by," Charbonneau changed his mind. "I am not living here. I am not raising my kids in Toronto."

He wanted to move back to Sudbury. Although he thought it would mean that he would have to diminish his expectations, Charbonneau was prepared to do so.

"In our business it is probably more important to make the right decisions along the way," he says.