With both lodges situated on their own fresh-water lakes, surrounded by dozens of fast moving tributaries throughout the Albany River watershed, it is a devoted angler's dream.
Sep 2, 2020 4:56 PM By: NOBA Staff 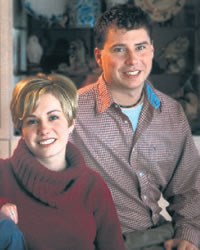 North Bay's Liddle family operators have found ways to keep hooking repeat business to one of the most upscale fly-in fishing resorts in Northern Ontario.

The remote two-lodge Albany River operation is managed by siblings Steve and Heather Liddle. Steve co-owns the resorts with brothers David and Rodger Liddle. Their passion for fishing and enthusiasm for the Northern Ontario lifestyle has fueled three successive generations to build and operate successful premier lodges since 1960, when the late Gerry Liddle (grandfather), purchased Camp Lochalsh on Wabatongushi Lake, a remote fly-in lodge north of Wawa.

Their passion for customer service has earned them a 2005 Northern Ontario Business Award as Company of the Year (1-15 employees).

During the 1970s and 80s, brothers David and Roger constructed and ran two fly-in lodges north of Hornepayne, both now sold.

It wasn't until 1993 that Steve took over the operations of the Makokibatan Lodge, while continuing his studies in environmental biology at the University of Guelph. Six years later, the family acquired an upscale fishing resort known as Miminiska Lodge, which is managed by 26-year-old Heather, a business graduate of McMaster University.

As the only lodge operators in the Albany River area from mid-May to mid September, the Liddle's have three full-time employees and between 20 and 23 seasonal employees, plus guides.

Accessible only by air through the gateways of Thunder Bay and the tiny northwestern Ontario community of Nakina, the luxury outpost camp attracts a steady stream of fishing enthusiasts, 80 percent of whom are American, as well as corporate groups.

Although access to the lodges can be a stumbling block, the private on-site 2,400-foot airstrip at the Miminiska Lodge provides Steve, a commercial forestry pilot, to operate direct flights out of Chicago, Minneapolis and other U.S. cities.

"Access is such a key component to the North," Steve says.

While the reservations and administrative responsibilities are run from the corporate office in Callander, just outside of North Bay, the brother and sister duo have managed to not only increase their clientèle and repeat business, but in four years, they have nearly doubled their gross revenue.

Despite the effects of challenging global events and a surging Canadian dollar on the tourism industry in Northern Ontario, the company continues to grow each year and has projected an additional 12 percent increase for 2005.

This steady incline can be contributed to the Liddle's philosophy that focuses on client needs. Since about 70 percent of their business is repeat customers, it's all about building and maintaining relationships.

Steve says they spend a lot of one-on-one time with the guests developing a relationship so that in the fall, a follow-up phone call is actual dialogue, more personal in nature.

The use of the Internet has also aided the Liddle's in building relationships. Four times a year, clients and/or potential clients receive a newsletter via e-mail featuring reminders, updates on specials and contests.

"Once we get an inquiry, we set up a relationship with that person with a lot of follow-up telephone/e-mail communication," Steve says.

The increase in corporate activity has also improved business. Union Gas, Tabasco Co., Grant Forest Products and Mitsubishi Canada are some examples of companies that have either offered sales incentives to employees or executive retreats at the facilities.

Other factors that have kept the Liddle's Fishing Adventure competitive with the bigger players include their customer service, which is second to none. Not only do they have a strategic screening process when hiring, they have a guest to staff ratio of two-to-one; extremely high in the tourism industry.

The service has been touted as first-rate, northern hospitality, and the staff described as dedicated.

Providing high-end equipment on the boats, complete with depth finders, rod and reel combos, and new motors every year, also enhances the vacation experience. Digital cameras are placed on the boats for guests to capture that picture perfect moment. Whether it is a picture of the big catch or capturing pleasurable moments during the day, a CD is burned with each guests' collection of photos to take home and share with their family and friends.

"People really like those memories they get to take home with them," Steve says.

He added that they put those photos online and when guests see them, it establishes a sense of loyalty.

With both lodges situated on their own fresh-water lakes, surrounded by dozens of fast moving tributaries throughout the Albany River watershed, it is a devoted angler's dream. Inherent in the clear, fast-moving cold waters are spawning and living conditions that produce numerous varieties and trophy-sized catches, such as pickerel, pike and trout.

In tune with environmental conservation, the Liddles encourage the guests to catch only what they can eat while on the lake, in order to preserve a healthy fish habitat for years to come. For those taking fish home, the Ontario Conservation Fishing License limits are respected. Also, in order to maintain the fragile brook trout species, only barbless hooks are used for easy catch and release.

Liddle's Fishing Adventures is also a strong supporter of Ontario tourism and are active members of the North of Superior and Sunset Country travel region. They are also members of Northern Ontario Tourism Outfitters (NOTO), and Steve and Roger are involved on committees for the Ontario Tourism Marketing Partnership.

As the company continues to grow, cultivate and deliver five-star comfort and service, the Liddle's hard work and dedication will continue to ensure guests leave with a boatful of vacation memories in Ontario's far North.