“I was always leaning towards engineering,” said Gavan. “I like that there’s always new innovations coming out, and mechanical engineering is concerned with building machines and technologies that could help.”
Sep 2, 2020 9:34 AM By: NOBA Staff 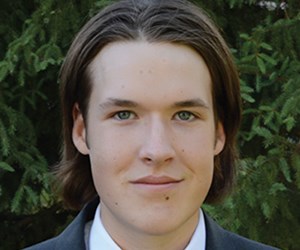 Devon Gavan is a low-key environmentalist.

Although the first-year Laurentian student may be understated about his environmentalism, he definitely cares.

“A lot of people don’t embrace it, really. I do care about the environment, I just don’t preach it to everyone,” according to Gavan.

Gavan doesn’t preach about environmentalism to his friends, but it’s been on his mind since he was a young boy, looking up at one of Sudbury’s best known landmarks, the Superstack.

“You see the Superstack and as a kid you say, ‘Why is there smoke coming out?’” said Gavan. He never got a satisfactory answer to that question until he started looking into it himself.

Gavan just graduated from Bishop Alexander Carter Catholic Secondary School in June. He found an opportunity to learn more about the environment when he embarked on a research project about “The Future of Energy,” during his final year.

While doing his research, Gavan became fascinated by alternative forms of sustainable energy. He delved into the benefits and costs of each. He analyzed the abundance of fossil fuels, the efficiency of nuclear power, and the renewable nature of solar, wind and geothermal energy. But he also addressed the greenhouse gasses from fossil fuels, the waste and risk of nuclear power, and the sometimes prohibitive costs of renewable energies. He reflected on the conflicting priorities policymakers are faced with every day.

“Sadly, it’s not possible to just go out and grab some sustainable energy. There are many factors involved,” he wrote.

As he did his research and balanced the benefits and risks of the sources, Gavan became fascinated by what comes next.

“I want to see where it’s going to go from here. With fossil fuels, we’re using it all up. We need to figure out a new sustainable energy source before it’s too late,” said Gavan.

Gavan doesn’t claim to have the solutions to these problems, but he’d like to see schools doing more to educate their students about the subject, so that more pursue solutions in their studies. He said he found the high school curriculum lacked classes specifically geared towards the environment and its health. He would have liked more chances to learn about it than just through his research project.

“Schools should introduce a class that focused on the current situation with the environment, and how we’ve pretty much caused or amplified the effects of it. Not many people are educated on that,” said Gavan.

Gavan thinks that a better education system might break down some stereotypes about environmentalists being “treehuggers” or “hippies,” would help convince climate change deniers of the science before them, and encourage people to pursue scientific careers in environmental science.

For his part, Gavan will start his postsecondary education in mechanical engineering at Laurentian University in September. He hopes to use his newfound knowledge in that field.

“I was always leaning towards engineering,” said Gavan. “I like that there’s always new innovations coming out, and mechanical engineering is concerned with building machines and technologies that could help.”

And it seems his wish to learn more about the environment may come true this year, too. One of his first classes? Environmental studies.