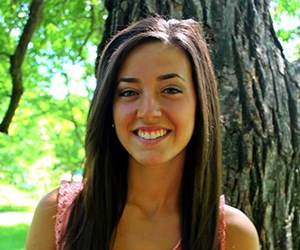 When Emily Soares decided to enter the Northern Ontario Business Awards 2014 Union Gas Essay Scholarship competition, she admits she did not know a whole lot about energy production and the increasing move toward green energy.

But after her father told her about the essay competition she went to her school's library and immediately grabbed every book she could find on the topic.

That commitment to research a subject that was new to her helped Soares win the competition and the $3,000 scholarship that comes with that victory.

Soares, a recent graduate from Sault Ste. Marie's St. Mary's College, plans to start the nursing program at the University of Western Ontario in September.

Once she gets her nursing degree, the ambitious 18-year-old hopes to apply for medical school.

"I'm really excited," she said about her looming future as a post-secondary student and her first experience living away from home.

In her essay, Soares outlined the history of energy production. The ancient Greeks, she said, first harnessed the sun's energy in the 4th century.

While they were far removed from today's photovoltaic cells, Greek soldiers would use mirrors to blind their enemies with bright streams of sunlight.

The Egyptians, she wrote, were early adopters of wind energy with their sailboats. That technology proved to be one of the most important advancements for early civilizations.

She also wrote about how the Dutch built windmills to use wind energy to grind grain and pump water.

"No other country has as many windmills as Holland," she wrote. Her essay also covered the industrial revolution, and humanity's growing dependence on hydrocarbons.

"The demand for energy has continued to increase over the years, making it an incredible priority to determine methods of not only conserving energy, but also managing the production," she wrote.

Soares said in recent years, the public has become more conscientious of energy usage and the move to increase green energy production.

But more needs to be done to move away from fossil fuels, she said.

"A lot of teenagers don't care as much as we should," Soares said. "Once you make a change for the better it will catch on. It's just a chain effect."

In Toronto, for example, the city implemented its Home Energy Loan Program in 2013.

The financing tool loans residents the funds needed to upgrade their insulation and replace old furnaces with more cost-effective alternatives.

After the resident completes the home improvements they repay the city through instalments on their property tax bill.

Payments to the city are made over a 15-year period, and the homeowner benefits from new energy efficiency savings.

Despite the damage that has already been done to the environment, and the growing amount of greenhouse gases in the atmosphere, Soares said in her essay she is confident the planet can regain its natural equilibrium.

"Our generation is able to innovate new techniques and procedures to create energy in a cleaner and safer manner," she wrote. "We are the future of clean energy, and it is our responsibility to aid in the saving of our planet."