“Maybe one day this world will see humanity and sustainability walking down the street hand in hand.”
Sep 3, 2020 2:09 PM By: NOBA Staff 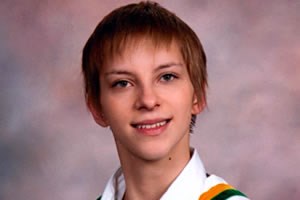 In a world where a rapidly growing population is putting a strain on our resources, it’s students like Irina Cividino who are leading the charge to take care of Mother Earth.

Titled Be the Change, the paper promotes her world view where we can all contribute to Earth’s sustainability without having to be activists. The title is part of a quote from her idol, Mohandas Gandhi, who famously said, “Be the change you want to see in the world.”

“If we’re all making small changes, I think people are going to be driven to make bigger changes,” says Cividino.

She works on a daily basis to reduce her strain on planet Earth. She uses energy-efficient light bulbs, doesn’t drive unless absolutely necessary and writes on the backs of the pages of her old school notes to save paper.

“I think we’re just given the impression that we can’t do really big things, even though we hear about it on TV and everything. I don’t really know if it’s in my power to change things like that, but I know if I try, it’s the first step. I just think, if you have the motivation and passion to do it, you can make anything happen.”

She tries to lead by example because she says it’s more important now than ever before in our dying world.

“All I know is, I want to inspire people and I think that’s essentially one of my primary drives in life.”

She writes about how the Earth needs people to pay attention to restore it back to its former health after years of pollution and abuse.

“It is our duty, as the intellectual inhabitants of this vast planet, like the bees of a hive, to sustain our habitat, our home or it will collapse, she writes.”We need to learn to live a sustainable lifestyle where we are not overshooting our resources, being greedy and only having consideration for our own personal well-being.”

But it isn’t all doom and gloom. She concludes her essay with a more hopeful message for the future, stating even though past efforts have failed, the future could be bright for environmentalism on the planet.

“Maybe one day this world will see humanity and sustainability walking down the street hand in hand.”

Cividino finds time to care about the environment, despite having a busy schedule as a synchronized swimming coach, a lifeguard at the YMCA, a member of her school’s Free the Children chapter and all the while maintaining an average over 90 per cent in Grade 12.

This fall, Cividino will be putting her scholarship to use when she attends Laurentian University to study sports psychology. She became interested in the subject after seeing a sports psychologist working with her synchronized swimming team. After getting her degree, she plans to continue her education in international human rights.

She says she wants to study human rights because, besides the environment, she’s passionate about helping children in Third-World countries and hopes to volunteer in one after her university studies are finished.

Her drive to help these causes is relatively new. Growing up, she was passionate about the environment and helping people, but she used to feel like she was too small to do anything to change the world.

But that changed last year when she attended a camp for exceptional students with an 85-per-cent-plus average. She became inspired to at least try and make a difference after a speaker told her to think about us as a community instead of ourselves.

Back home in Sudbury, Cividino now wants to see compost bins distributed throughout the city, electric cars on the road and solar panels and wind turbines installed all over the city. LED light bulbs, recyclable water cartridge filters, biodegradable food packaging garbage bags and green roofs would also contribute to a healthy environment, she says.

“I think that’s the big solution to global warming.“We have to respect the world and nature and be a little more conscientious of their decisions.”

In her essay, Cividino writes about leading by example by recycling, reusing and carpooling in the hope others will become inspired by her beliefs and catch on.

She hopes one day being ungreen will be uncool.